If I tell you guys something, do you promise not to judge me? I don’t like pie. 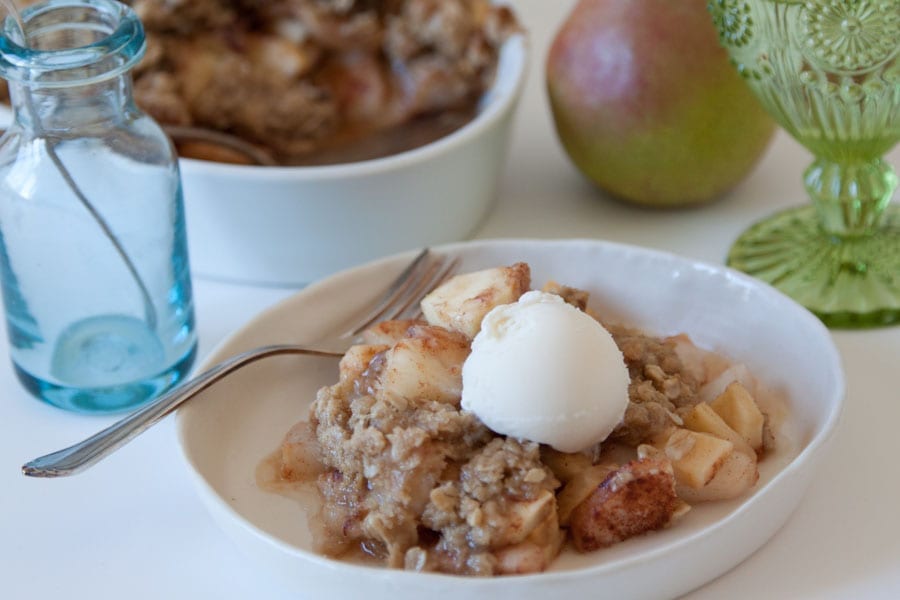 And because it’s November, and I’m sticking with my serious Thanksgiving prep mode, I’ve made this Apple & Pear Crisp with Crystalized Ginger!  This dessert is totally divine. So divine that I’d like to have a scoop for breakfast right this very moment, but I’m going to refrain from doing so because I chowed down on half the pan yesterday after it’s photo shoot!

A few weeks ago I spent a couple of days up in Southern Oregon learning all that there is to learn about Harry and David! It was such a fabulous trip and I am absolutely blown away by what wonderful people are within their company and how most of the people working at Harry and David have been there for years! And I’m not talking 5, 10 years. Think like 20-30 years!! That’s dedication!

Here’s a little picturesque glimpse into what we did! 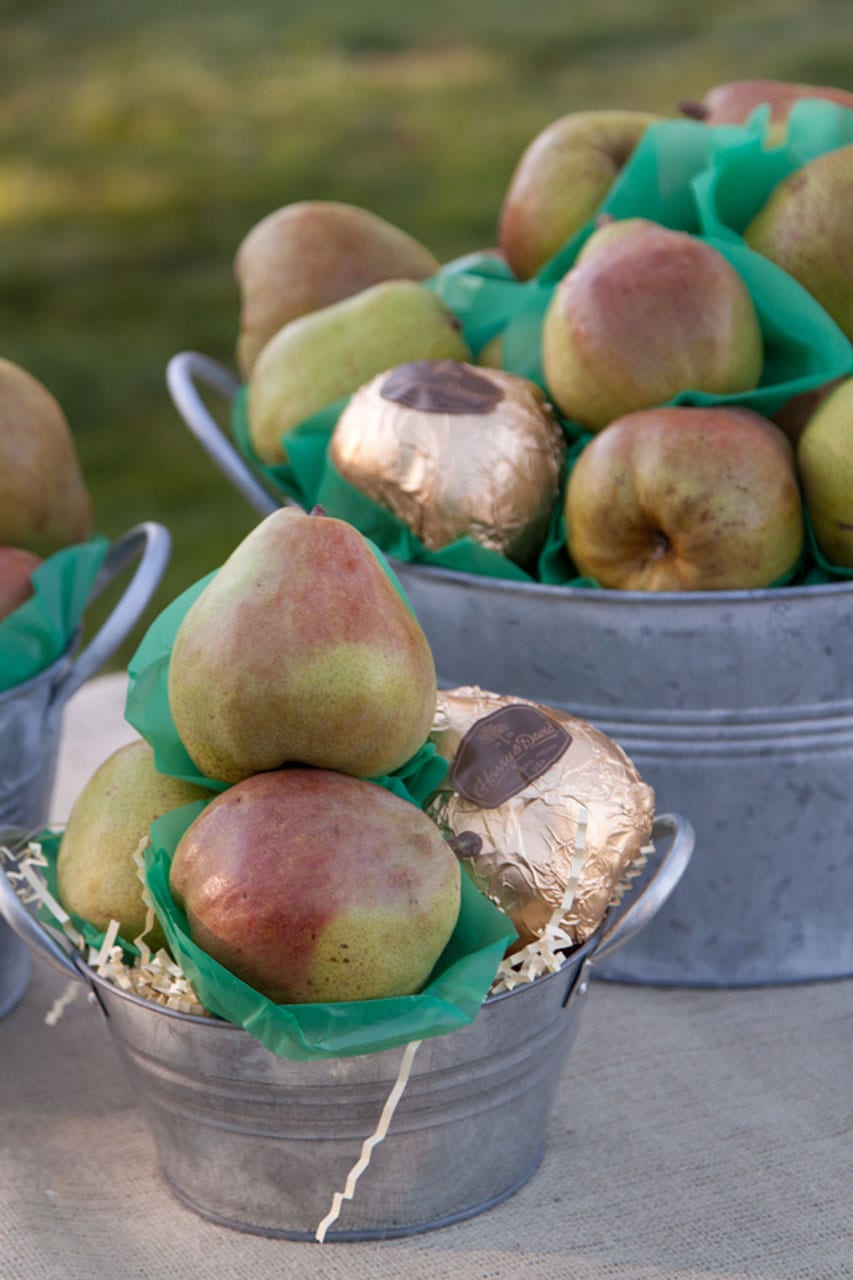 We toured the Harry and David pear orchards which were absolutely gorgeous! I want to have a party in this orchard. It’s stunning 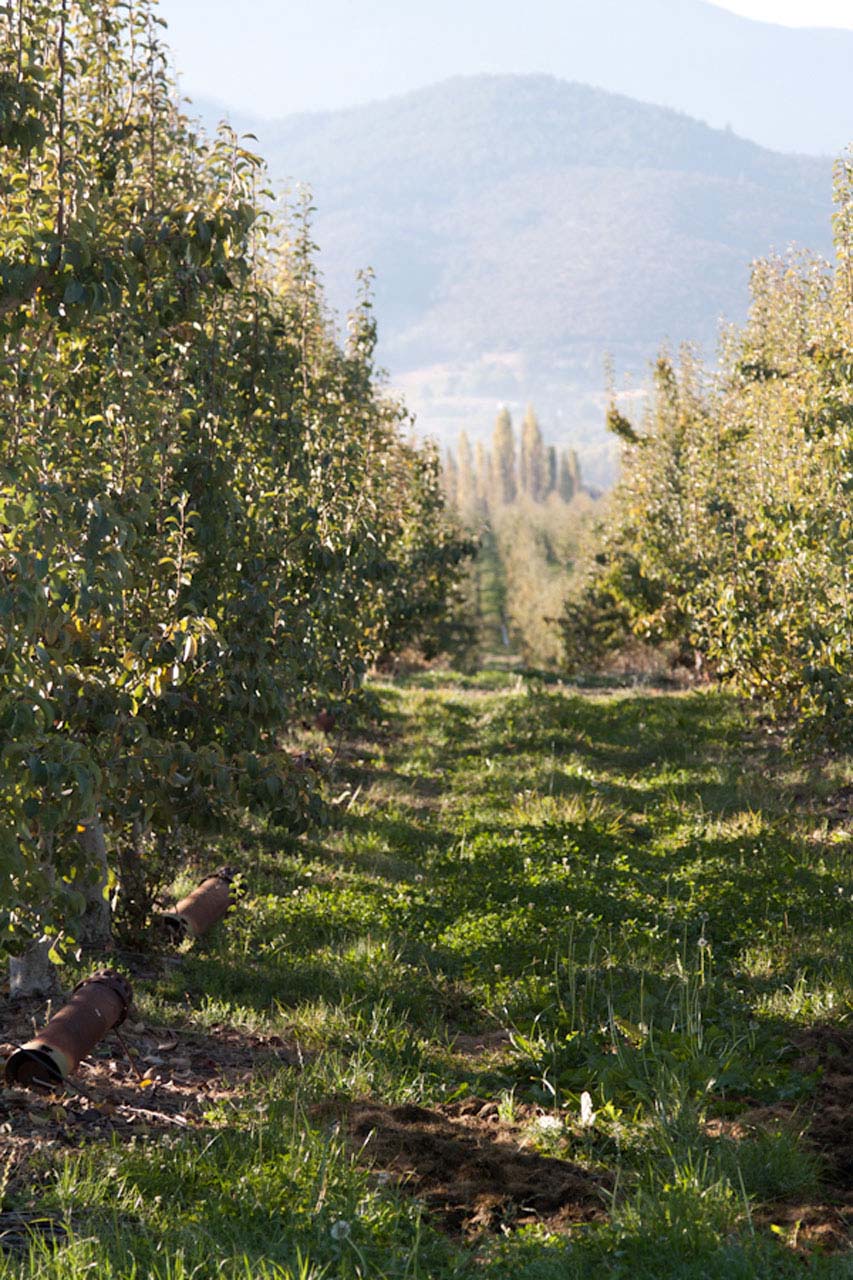 Sandy, our hostess with the mostess, who helped put together the trip with Harry and David, had us all over to her house for dinner! How fantastic is that! She made us an unforgettable meal that was complete with fun Harry and David touches throughout! One of the most memorable courses was for sure the dessert. 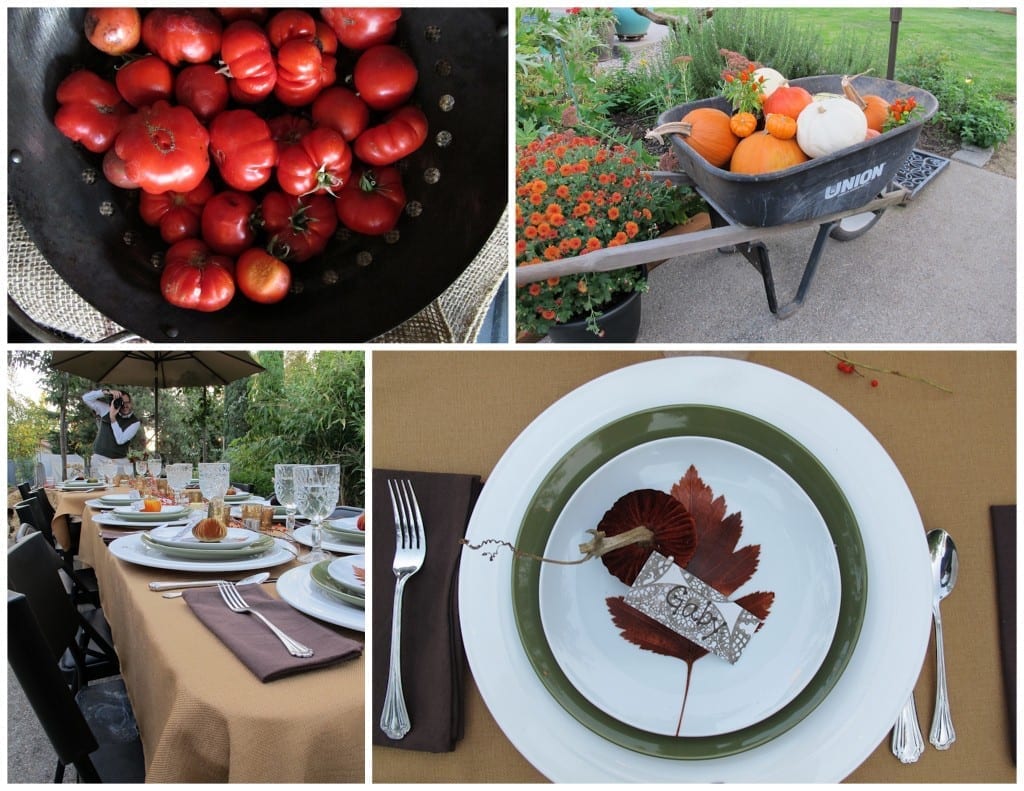 We had plenty of wine and a gorgeous platter for fruits, cheeses and Harry and David spreads too! I was pretty much in heaven. 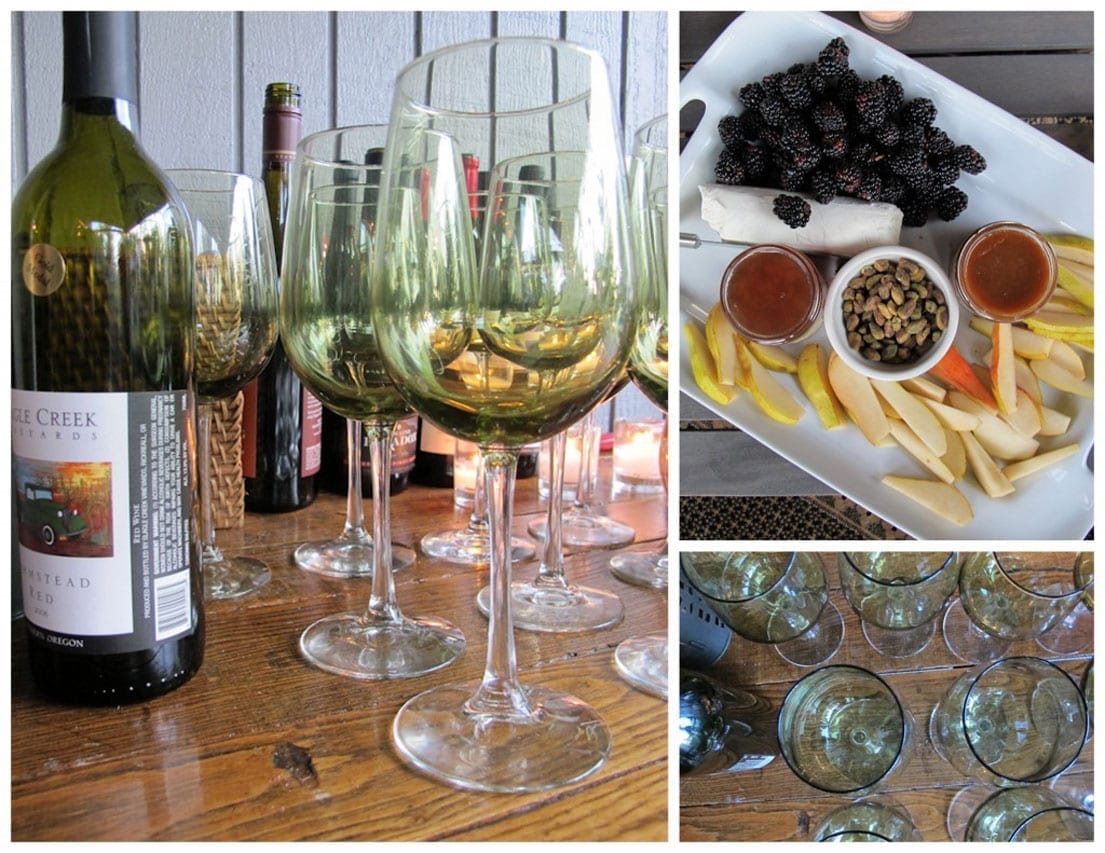 Perhaps one of my FAVORITE moments of the trip was in the candy kitchen at the Harry and David headquarters! We got to decorate our own chocolate covered pears and taste test a variety of different chocolate that the test kitchen uses in their creations! And of course, I can’t forget the moose munch!!

Have you ever had moose munch? I hadn’t until this trip! My life is changed for sure. It’s sooooo good! The perfect combination of sweet and salty in a snack!

We had a bit of free time too! So we got to explore Ashland Oregon for a few hours! It’s seriously the cutest little town ever and the people there are beyond nice! Everyone was more than happy to answer any questions we had about the town or lend a suggestion or two. 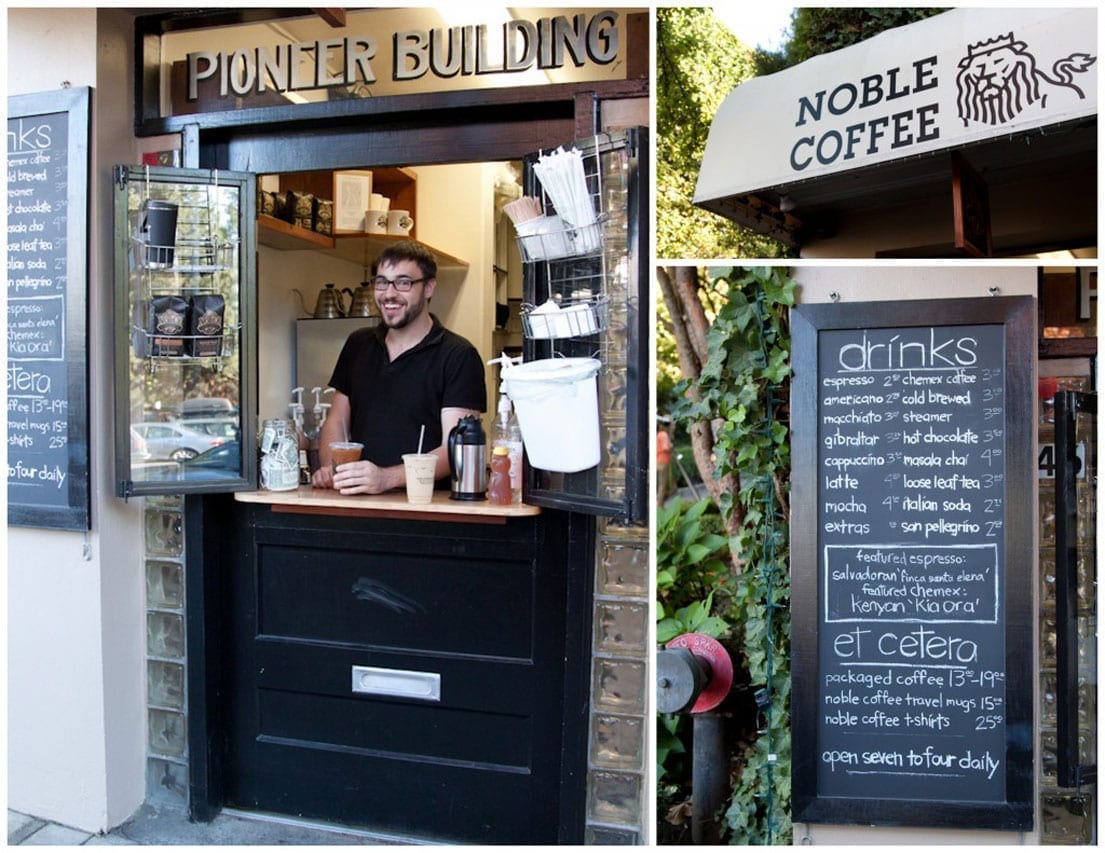 After returning from Oregon, I had a boat load of fabulous pears from the Harry and David orchards that needed to be put to good use. While they are absolutely delicious to eat on their own, I wanted to make this Apple & Pear Crisp with Crystalized Ginger. I threw in a handful of chopped crystalized ginger because it felt like the right thing to do… and voila! A yummy Apple & Pear Crisp with Crystalized Ginger that would make for a perfect addition to your Thanksgiving table this year! I mean, I guess you could even serve it alongside a pie!!!! 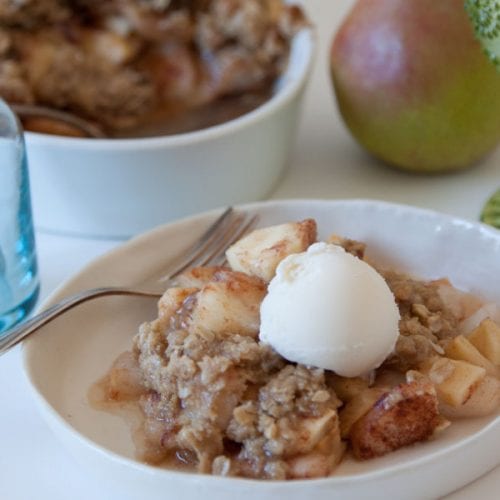 For the crumble topping:

**A big thanks to Harry and David for sponsoring this post and for letting me learn so much about their fabulous company! **