Raise your hand if you had a fab brunch on Easter. Keep it up if you drank bottomless mimosas. And keep it up a little longer if you had avocado toast as part of your menu. And how many of you took the day off yesterday? Well, I did all of that. And created a new avocado toast that is going to blow your minds. But more on that later. It’s exhausting hosting a brunch. There’s all that prep, then the actual entertaining portion, and don’t even get me starting on the clean up. So I allowed myself a little personal health day yesterday. But now we’re back in the game and I’m excited for today’s recipe! 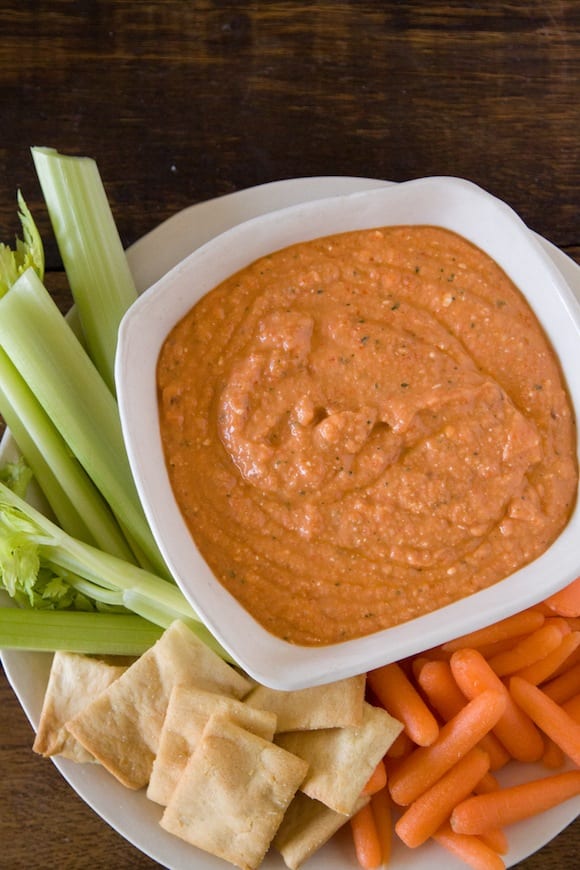 Also. Side note. What do you guys think of the new What’s Gaby Cooking design?! It’s responsive which means that if you look at it on your cell phone, tablets, or computers, it will adjust to fit the screen! We are still working out  a few kinks here and there – but I’m excited to hear what you guys think! Oh, and another thing… if you’re still using Internet Explorer 8 or lower, it’s time to upgrade. Everything gets a bit wonky on that internet server and I’d highly suggest making the move to Google Chrome, Firefox or Safari. I’m a fan of Chrome. It’s the best. Okay, let’s get back to the food. We can talk more nerdy web design stuff later. I’m making a crafty little video for you guys to show you around.

It’s Tuesday. Blah. And I am ready for a little somethin’ somethin’  that’s light and refreshing. Enter Bell Pepper and Mint Lentil Hummus. I know, mint in hummus? Kinda crazy right? No. It’s perfection. Also – I made this with lentils rather than chickpeas so not only does this hummus have less calories and less fat, but it has more protein, potassium and fiber! Which is exactly what I’m looking for. I made a big batch of this so Thomas could take a bit to work for snacks on a daily basis too. Because I’m a good wife. Or maybe because we just found out that he has super high cholesterol (even though he is in shape, works out daily, eats a healthy diet and has like less than 9% body fat) and I’ve taken it on as a personal challenge to get his cholesterol down to a normal number without the help of any meds. It’s gotta be genetic right?

Either way, it’s helpful for us to have healthy snacks like this on hand to munch on when you need a little pick-me-up around 3:00 in the afternoon. Or if you’re anything like me and sometimes like to substitute hummus for lunch. Especially this one, because it’s one of the best hummus’ (hummuses? hummi’s? what’s the plural of hummus?) I’ve ever made.

So hop to it and try some hummus with lentils and mint. It’s going to make you a lentil hummus convert in a snap!