If you’ve never had Cochinita Pibil before, get ready! This is the most tender, fall apart, perfectly seasoned pork you’ll ever have!

When we were in Mexico City last year, one of our favorite meals was from a hole in the wall taco shop next to our hotel. They literally ONLY served Cochinita Pibil! They had Cochinita Pibil tacos, tortas and quesadillas and we were in heaven. Cochinita Pibil is Yucatán-Style Barbecued Pork that is typically slowly cooked in a giant hole in the ground. It’s not spicy, has a subtle sweetness and works like a charm on tacos, nachos, sandwiches etc.

I don’t know about you guys, but I’m not planning to dig a hole in the ground anytime soon. I’ve done it once before when we were in Belize and it didn’t end well. Instead, we’re making this in our shiny new All-Clad Electric Dutch Oven. If you haven’t seen this cast iron Dutch oven before, let me give you the quick lowdown. You can use this like a typical slow cooker and utilize the simple one-touch menu to “set and forget” until it’s time to eat. OR you can use the cast-iron Dutch oven insert to sear and sauté food on the stovetop before programming the slow cooker. GENIUS. 1-pot meals just got a lot easier. You can also throw the Dutch oven insert into the oven should you need to transfer anything in there as well. It can do basically everything and it’s been living on my counter the last few weeks!

Okay now that we’re all informed on the best slow cooker out there, let’s get to the recipe!

Grab some pork, citrus juice, achiote paste (which can easily be ordered online or found at your local Hispanic market) and some cumin. Before you know it, your kitchen will smell incredible and you’ll be making all the food with Cochinita Pibil for the foreseeable future! Also bonus – this freezes great if you want to portion it out and freeze for a later date! 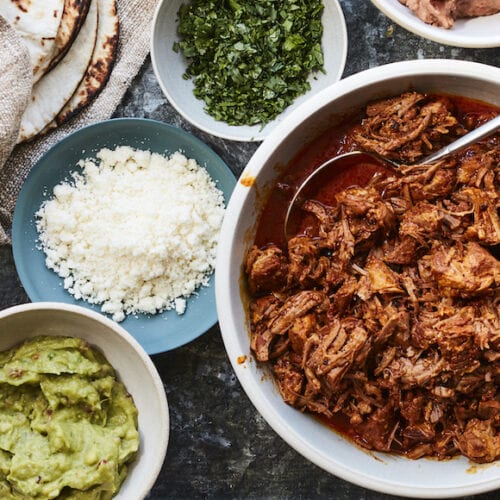