Hi, everyone! Kristina here bringing you Cookbook Club 26– all about food that says “home”!

This week I’ve chosen a book I have been waiting for since I heard Eric Kim was going to be writing it. Korean American: Food that Tastes Like Home is Eric’s first cookbook, but you are most likely already familiar with his voice and recipes from his Table for One column at Food52, or his contributions and videos as a staff food writer at the New York Times.

I have many many cookbooks. Maybe too many! And nice selection of Korean cookbooks, and I really appreciate how incredibly unique the recipes in his book are! Even more, I love how he and his mother team up together to make food. You really see Korean and American ingredients come together in such a ‘respectful’ way, with the Korean influence and tradition sometimes outshining the American, but it always makes sense. Eric’s narrative makes it even more special because it is almost like sitting at the dinner table with him and his mother while he shares the stories behind what you’re eating. We’ve chosen his recipe for Lemon Pepper Bulgogi and hope you’ll love it!

Speaking of food that tastes like home, another book came out this month by Pat Martin and Nick Fauchald called Life of Fire: Mastering the Arts of Pit-Cooked Barbecue, the Grill, and the Smokehouse. Pat Martin is the Martin of Martin’s Bar-B-Que Joint in Nashville, which serves West Tennessee style barbecue. For me, food that tastes like home is BBQ. Dry ribs, not wet.

Time for a little Q&A with Eric:

What is the first recipe from your book you would recommend to someone who is unfamiliar with Korean food? There are Three Dinner Toasts in the TV Dinner chapter that are essentially representations of the kinds of pantry-raid meals my brother and I cooked for ourselves when we were little. So if you’re asking for an intro-to-Korean-flavors, then it’s definitely those. Each one highlights a different essential Korean taste: nutty-salty (avocado-seaweed toast), eggy sweet (soft-scrambled gyeran toast), and rich and spicy (gochujang-buttered radish toast).

For busy people who want to have a great meal on the table in thirty minutes, which recipe would you recommend? This might be cheating, but the jalapeno-marinated chicken tacos are a great make-ahead option. If you marinade the chicken the night before or in the morning, you just have to plop it on a sheet pan and roast for 25 to 30 minutes as you walk through the door, pour yourself a glass of wine and change into PJ’s. Meanwhile, you can prepare the watermelon muchim, which serves as a refreshing, slightly sweet but savory gochugaru-flecked salsa of sorts (and even that can be made in advance). There are plenty of 30-minute meals in the book, but for me, it’s cooking in advance that makes for a really great spread later.

The Korean Ambassador to the UN is coming over to dinner tonight. Which recipe from your book would you make for him and why? I think I would set up a nice Korean bapsang for him, which means: a full spread with one or two dishes from each chapter. Probably the doenjang jjigae with silken tofu and raw zucchini, the gem lettuce salad with roasted-seawed vinaigrette, three or so of the kimchis and maybe the fried yellow croaker. A bowl of steamed white rice, too, of course.

When you are cooking, what is your favorite flavor combo? Sweet and salty 🙂 — and this is where a cheesy person would say, LIKE ME.

How did you choose which recipes made it into the book? Each recipe had to pass a taste test between my mother and me. Our palates are pretty different, actually, though our cooking styles merge somewhere in the middle with this book. What that means is, when something needs salt for her, that means it really needs salt (she’s sensitive to it). Or let’s say I’m really excited about something: I would have to keep developing it until my mother felt, as well, that it was perfect. And I knew when a recipe was perfect because she would take a bite and say, “You should open a restaurant.” And I’d say, for the 100th time: Mom, I am NOT a chef, I am a writer!

Are there any that didn’t make it in that you really wish had made the cut? There’s a tteokbokki that just wasn’t good enough yet. But I’m hopeful it’ll get there pretty soon 🙂

And then a lightning round:

What’s the one dish you can never say no to? Pizza

What’s the one dish you will always say no to?  Panna cotta

A person you would love to cook beside to learn more ideas to use in your own home cooking? Maangchi

If you could travel one place in the world to EAT, where would you go? Kyoto 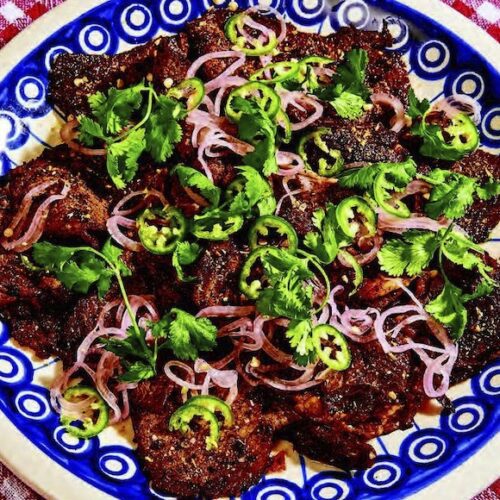