Cookbook Club #19 is back in action today!! Turning it over to our girl Kristina Gill to give you the latest on our favorite cookbook this month. And if you missed the intro to Kristina – please put your hands together for our very first editor here at What’s Gaby Cooking besides me! All yours KG! XX

This week we have added a new feature to Cookbook Club! At the bottom of the main cookbook, we will put two covers of similar books if you are looking for something that matches the featured cookbook or cookbook theme. Our theme this week is: simple vegetarian/vegan.

Chef-in-Residence at the Museum of the African Diaspora in San Francisco. He’s also synonymous with food justice and vegan cooking. Vegetable Kingdom is his fourth cookbook on vegan cooking. As with previous books, the recipes are accompanied by a suggested song that mostly fits Bryant’s jazz-heavy preferences. I appreciate the marriage of food and music in Bryant’s books because I, myself, like to have something on in the background when I am cooking.

I like to think of the food in this book as a good mix of really accessible and really fancy. By fancy I mean composed of several small recipes. On one hand, this could seem daunting, on the other hand, I believe it offers more choices. If one aspect of a recipe is your favorite part, you can always return and make just that single part of the entire recipe. This goes for the strong section at the end of the book entitled “cupboard” that includes stocks and broths, creams, flavored oils, vinegars, sauces, spreads and marinades, and seasonings. So many of the recipes include one or more of these, if you’re like me and love having little sauces and seasonings in your refrigerator to dress up simple food such as a bowl of lettuce, a simply grilled chicken, roasted vegetables, even a piece of toast with your favorite topping, then the ‘cupboard section’ alone is worth having the book.

My recommendation on cooking with this book is to start with recipes for which you have the ingredients on hand, and gradually build your cupboard to include items such as fonio, millet, Bragg Amino Acids, and anything else you might not already have. This way you will build up your arsenal of ingredients to be able to regularly repeat your favorite recipes in the book.

Other recipes in the book you’ll be excited about in addition to the Warm Butter Bean Salad with Roasted Bell Peppers below include Caramelized Leek and Seared Mushroom Toast, Crunchy, Bitter and Tart Salad with Sweet Mustard Vinaigrette, Dirty Cauliflower, Roasted Sweet Plantains, Pecan and Millet Salad, and Spinach Salad with Blackened Chickpeas.

We’d love to hear what you think and what you’re cooking from Vegetable Kingdom! You can find it at Seattle’s Book Larder.  If you get stuck on anything remember you can always reach out to us and/or @bryantterry on Instagram for help! And don’t forget to tag your posts on IG with #WGCcookbookclub.

What’s your favorite recipe in the book and why?  The Citrus and Garlic-Herb Braised Fennel by far. That dish acted as the catalyst for unifying the dynamic spirit and energy that permeates Vegetable Kingdom. The recipe is a symbol for the way I approached this book, taking familiar vegetables and giving them my Afro-Vegan spin so my kids would like them.

What was the hardest recipe to get right and why? The Baked Fonio and Kale Balls. After my friend, chef Pierre Thiam, introduced me to fonio, a grain that many believe is Africa’s oldest cultivated cereal crop, I was committed to making a dish using it. The flavor of this dish is so delicious, but I had to rework the recipe a lot to ensure that they weren’t fragile and had structure.

For someone who’s never cooked from your book before, what recipe would you tell them to cook first and why?  The Broccoli-Dill Sandwich Spread. It’s such a straightforward recipe that transforms broccoli into a versatile spread/sauce that can be used for sandwiches, pasta, or dipping crudités. Tejal Rao wrote a cool piece about this recipe for The New York Times Magazine ( https://www.nytimes.com/2020/03/31/magazine/broccoli-dill-pasta-recipe.html ), and I got messages from around the world about how much people loved it. Many parents sent notes about how much their kids devoured it.

A recipe from your book that can be ready to serve within 30 minutes.   Cornbread Muffins. The whipped sweet corn and hot pepper jelly that I pair the muffins with take longer to make, but you can make the muffins quickly and serve them with ready-made butter, jam, and the like.

You’ve mentioned jokingly that you want to forget your previous books, Vegetable Kingdom is you, and you focused specifically the photography. How involved were you with developing the design direction and creating the images? Were you on set every day?

I was very involved in guiding the design and visual language of the book. Whenever I developed a recipe I would search the internet for images that spoke to my vision of how I imagined the dish being shot and put them into a file. When we got to the photography stage, I passed the files along to the photographer Ed Anderson and food stylist Lillian Kang so they would have references. I also worked closely with Ten Speed’s Art Director, Elizabeth Stromberg, to co-create a vision for the book’s design. I was on set every day giving feedback and working closely with the team to ensure my vision was executed. They did a fantastic job! 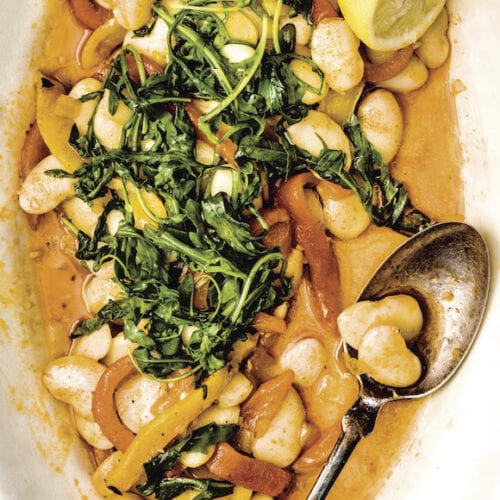 Smoky roasted peppers provide a bright contrast to the delicate, buttery flavor of big lima beans in this dish. The pili pili oil adds the subtlest kick—you’ll notice it, but it doesn’t overpower. Peppery arugula adds freshness, and a squeeze of lemon brightens everything. I created this recipe for a collaboration with Williams-Sonoma in 2019. My family had a Father’s Day cookout with some friends (hi, Maisha, David, and Naya) that was shot by my buddy photographer Erin Scott, and Williams-Sonoma featured the images in their catalog, on their blog, and across their social media platforms. That was a meaningful partnership, since Father’s Day is my favorite holiday of the year. While I’m appreciative of gifts, Father’s Day is about expressing gratitude to my family for the love they show me every single day. When I was working on this book, I spent more than a year testing recipes and writing almost every weekend (and a lot of holidays). My wife and daughters supported me wholeheartedly throughout that process. On Father’s Day weekend, I celebrate them for the privilege of being a husband and Baba.
Print Recipe Pin Recipe Review Recipe
Course Salad
Servings 4 people

For the Pili Pilo Oil

For the Roasted Peppers

For the Pili Pili Oil

31 of the Best Things to Buy at Trader Joe’s

Top 20 Binge Worthy TV Shows (and what to eat!)

New Products! Plus every recipe imaginable from the What’s Gaby Cooking Line!

How to Stock a Bar Cart