I’m a bit of an anomaly. I come from a family who isn’t nearly as obsessed with food as me, and growing up my friends didn’t really care much about food as well. Clearly I’m from another planet. The one thing we did care about growing up was chicken tortilla soup. There was one restaurant in Tucson (Café Terra Cotta) that has since shut their doors, that had the most epic tortilla soup in the city.

During the good old days of high school (when we literally didnt have a care in the world) we’d go out for lunch or a girls night out and without fail, each and every one of us would order tortilla soup. God forbid we should ever branch out and order something else. But then again, why would we want to when this place had the best chicken tortilla soup on the planet!!  It was equal parts smoky and spicy and I made sure to add extra cheese once it arrived to the table. #sorryimnotsorry

I’ve been craving a trip to Tucson lately so I whipped up a version of this Tucson inspired Chicken Tortilla Soup and piled it high with all the toppings! It’s  loaded with shredded chicken, cheese, plenty of cilantro, crispy tortilla strips and of course, avocado. (guacamole would totally work too!) 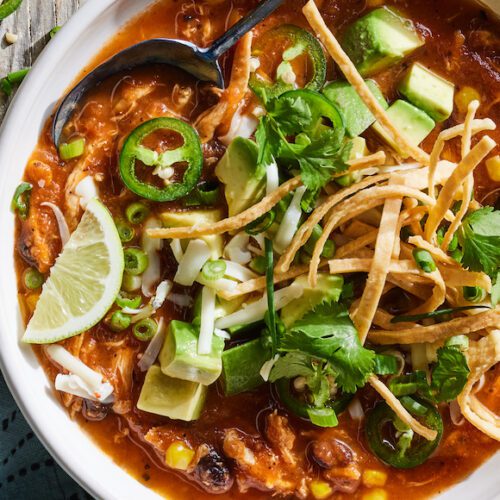