I’ll eat chicken parmesan in basically any form – but give me something that’s a bit lighter like this Spaghetti Squash Chicken Parmesan Bake and I am here for it!

We’ve done chicken parmesan ever which way here on WGC over the past few years. I can’t help it. It’s truly my favorite dish of all times and the flavors that come along with it make me infinitely happy.

I’ll eat it in meatball form. Whip it up the traditional way. Load it up with some pasta. Or even throw the flavors on top of a pizza … you name it. Recently I made it into a bake with some spaghetti squash in the name of keeping things light and OMG it’s a keeper. The spaghetti squash acts exactly like a pasta and absorbs the flavors of the chicken parmesan mixture perfectly. Everything get baked into a skillet or casserole dish and topped with cheese. You can even go so far as to serve it with burrata if you want to be extra decadent!

The result is a perfectly baked Spaghetti Squash Chicken Parmesan Bake / casserole-ish dish. It comes together in no time, especially if you bake the spaghetti squash off ahead of time and then toss it into the chicken once the recipe calls for it! 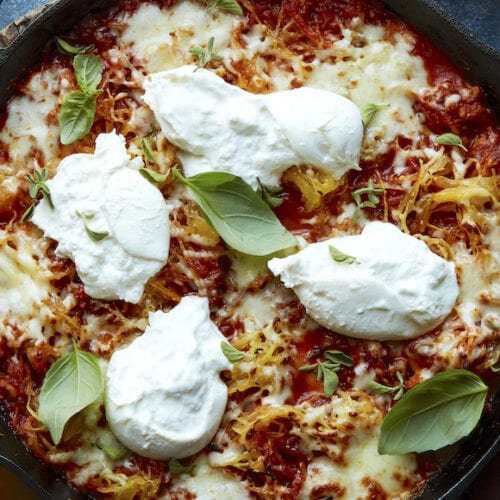