VERY excited for this recipe you guys – Leek Confit Pizza. Brace yourselves.

I’ve been on a leek confit train for the last few months. I made it back in July or August for another recipe and then proceeded to eat it with a spoon until it was gone. Rinse and repeat every week, bottom line… I cannot get enough. Leeks in general are just EVERYTHING.

For those of you who haven’t had or heard of Leek Confit before, it’s basically thinly sliced leeks that are cooked in oil or butter over medium/low heat for 30ish minutes until they are soft and melt in your mouth delicious. The result is PERFECTION. You can add it to any sort of protein, fold it into pasta, put it on veggies, eat it with a spoon like you’re an animal, you name it. Today, it’s the base of this Leek Confit Pizza and OMG IT’S PERFECTION.

So here’s the deal. Pizza dough slathered with leek confit, piled high with 2 kinds of cheese, seasoned and baked to perfection. You can add a handful of seasoned arugula on top if you want to give it a pop of color and freshness! Trust me when I tell you… it’s is one of the best pizzas I’ve ever made and Leek Confit Pizza is on repeat for the foreseeable future.

And a word about the leek confit: it lasts in the fridge for a while!! You can freeze if you want to save it for more than a week! 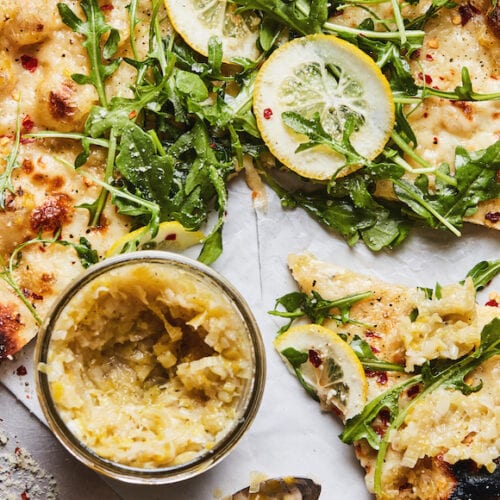 For the Leek Confit