We’re spatchcocking today!! Get excited. This Lemon Roasted Spatchcock Chicken is coming your way and it’s a great way to meal prep for the week.

In case you haven’t heard of spatchcocking – it’s basically splitting the chicken by removing the backbone and flattening it out so it roasts much faster. And while that might sound complicated – we’ve got a step by step photo tutorial on how to do it!

Growing up, my parents would always make whole roasted chickens on the regular. They were amazing to say the least. And let’s not even start on the crispy chicken skin – I’d demolish that by myself no problem. The whole house would smell fantastic and if there were leftovers, my mom would throw them into one of my favorite casseroles for the next night.

These days, I make my own roasted chicken a few times a month. And when there are leftovers, I’ll throw them into the same casserole that my husband is now obsessed with or put them into a salad of some sorts. Last weekend we were in a bit of a rush to head over to a friends party, but I was determined to roast one off for the week to use as leftovers. So instead of roasting it whole, I spatchcocked it! GENIUS! Way less time and just as delicious.

Spatchcock is just a fancy way of calling a chicken or a turkey that’s been butterflied. The backbone is removed so you can open it up and roast the entire thing so it’s extra crispy.  I roast mine with tons of lemons, salt, pepper, garlic and whatever herbs I have on hand, plus some potatoes to catch any of the drippings and soak up all that flavor.

Once it’s done, not only will your house smell absurdly delicious, but you’ll have one good looking dinner and hopefully leftovers! Carve it up, shred it up, toss it into some enchiladas and never fear about having time to roast and entire chicken ever again!

And while this is a tutorial for a Spatchcock Chicken, you can do the same thing with a turkey! And you can spice either differently depending on what you plan on using the meat for. 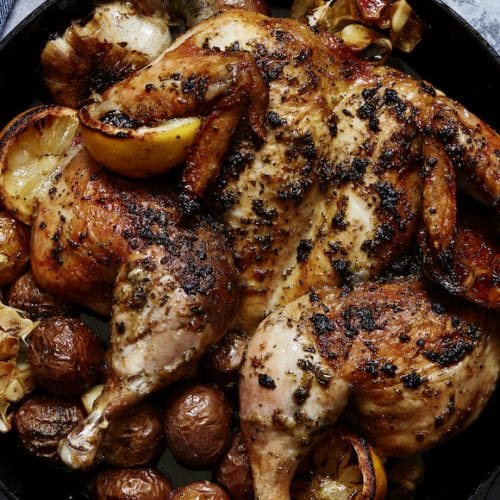