Do you guys know my friend Joy? She’s basically the queen of all things baking which is why her blog is called Joy the Baker. Obviously. I’ve mentioned her new cookbook, Homemade Decadence, before but it needs mentioning again because after reading it cover to cover there was some baking to be done. I couldn’t really come to a conclusion on what I wanted to make first, mostly because I WANTED TO EAT EVERYTHING IN THE BOOK. So what’s a girl to do? Pick 3 recipes, mash them up into 1 and then stuff my face. Totally normal. So that’s exactly what I did. Graham cracker crust + chocolate pudding + marshmallow meringue. It’s genius. And it’s what’s going on my Thanksgiving table this year instead of pumpkin pie – because (gasp) I don’t like it. Sheesh, sorry. I can’t help it.

So take a page from Joy and throw this S’more Pudding Pie on your menu too! And while you’re at it – you should go buy her book because it’s all you need for gift giving this holiday season. And if you make any of the recipes in it you will look like a shining star. So that office bake-off you have coming up – she’ll help ya knock it out of the park. 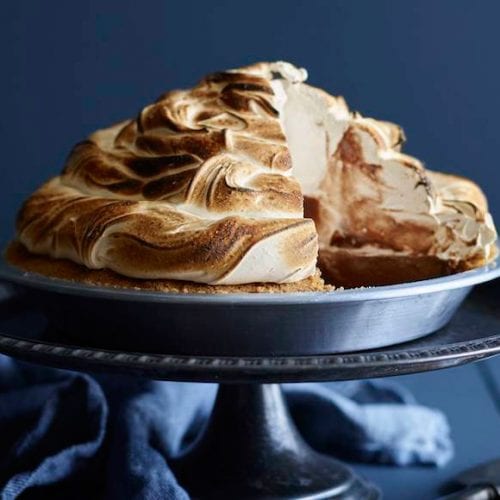 For the Graham Cracker Crust

For the Chocolate Pudding Filling

For the Marshmallow Meringue

For the Graham Cracker Crust

For the Chocolate Pudding Filling

For the Marshmallow Meringue