Fully Loaded Baked Potato Soup is exactly what we all need simmering away on the stove right now. It’s the right thing to do!

Are you looking for a fun and easy soup recipe that the whole family will love? Well, look no further than this Fully Loaded Baked Potato Soup! It’s super easy to make and is perfect for a family dinner or as part of your holiday feast. Plus, it’s perfect for warming up on a cold day. So, what are you waiting for? Give this soup a try today!

We’re really weird people here in LA. We don’t handle the cold well. Driving down the street these days, no joke every single person is bundled up in leggings, jackets, vests, scarves and Ugg boots. It was ah-mazing and hysterical and embarrassing all at the same time. I’ll be the first to admit that I’m a wimp when it comes to cooler temps, but there’s a really delicious solution to that… Fully Loaded Baked Potato Soup!

It’s a thick and creamy soup made from baked potatoes, but what really makes it shine are all the toppings. Crumbled crispy bacon, shredded cheddar cheese, finely sliced scallions, FRIED POTATO SKINS, I mean… what more in life could you ask for? It’s everything you’ll find in a baked potato but in soup form. I’m into it and you should be too!! Bonus: the base of this soup freezes really well and you could make a double batch for the upcoming winter months!

And if you need a few more wintery soups for your arsenal along with Fully Loaded Baked Potato Soup: 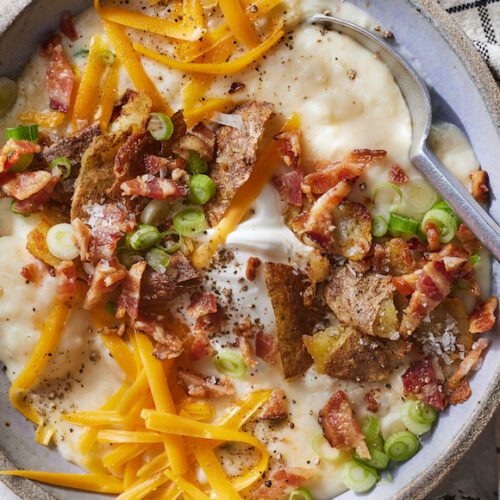