Did you know there was a period of time when I was scared of pickles? If you’ve been following along for the past few years, that won’t come as a surprise to you. I was a picky eater! But these days I’m all about these Homemade Spicy Pickles!

OMG. These are hands down the best homemade spicy pickles on the planet! You can make them as spicy as you want or keep it mild – but literally get ready for your life to change. They are rocking my world and I’ve been making them on repeat ever since Persian Cucumbers have been exploding at the farmers markets.

I’d classify these as quick pickles. It doesn’t take weeks to make them, just a few hours. Which means they are perfect to whip up the morning before a party, or the day before a BBQ… I’ve got ya covered!

Garlic and ginger are the 2 most prominent flavors in this and gives it some real spunk. The rice vinegar gives it even more flavor than a traditional white vinegar, in my opinion! And the jalapenos and the green onions are icing on the cake. You can leave out the jalapeno if you want it to be mild, no problemo! 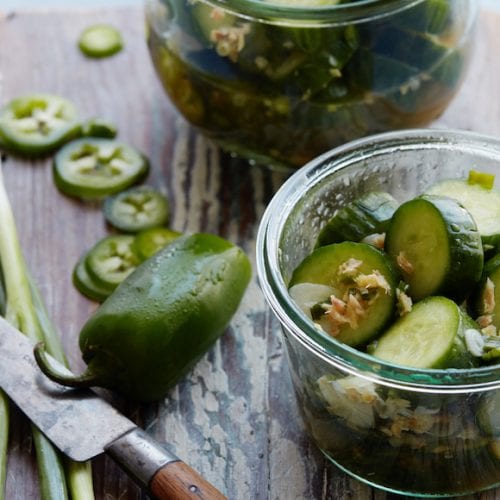