I am 100% obsessed with these Parmesan Braised Leeks and I cannot be stopped!

Here’s the thing about leeks – they are absolute perfection when done properly. Similar to that of Brussels and/or Asparagus, they don’t take much effort and they are best when done simply with a little zip and some crisp. I was talking to one of my girlfriends a few months ago who has a baby a few months older than Poppy – and she shared that her son was going to TOWN on Braised Leeks. Obviously, I marched straight to the store and bought some for us to try and home. You guys… these are legit candy. The leeks are so soft but have a little texture to them from the broiler. The parmesan gives them a nice salty finish. They don’t need lemon juice to taste, but you’re more than welcome to add it! They are quite possibly, the best spring side dish I’ve made in recent years. And that’s really saying something because we know I love my Parm Panko Asparagus!

A quick note on buying leeks – look for long leeks that aren’t dark green. The dark green part of the leeks is trimmed and discarded, so it’s not ideal. You want them to be as light green as possible as those leaves are more tender and delicious. 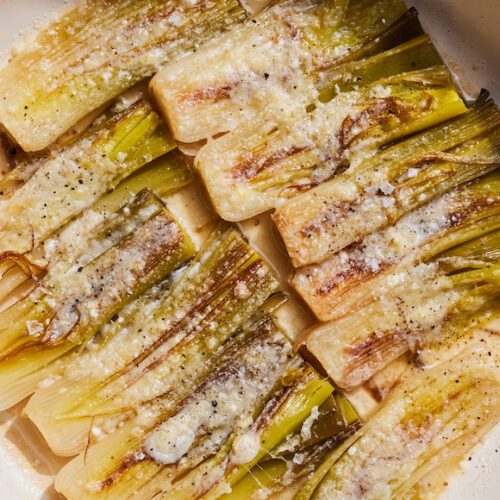 Gaby
While these braised leeks are truly the most perfect spring side dish, I also need you to know they are currently Poppys fav vegetable and she's eating them like candy! A win for everyone involved!
5 from 1 vote
Print Recipe Pin Recipe Review Recipe
Prep Time 20 mins
Cook Time 35 mins
Total Time 55 mins
Course Side Dish
Cuisine French
Servings 4 people

When you’re buying leeks, look for medium sized leeks that are HUGE. If the outer layers are super tough, you can discard them while cleaning to ensure that the leeks are super soft when serving.
Tried this recipe?tag @whatsgabycookin in your photos