Jalapeño Bacon Loaded Potatoes are here just in time to get me through fantasy football season!

It happened. Football season started and I’m once again left in the cold. It’s not that I don’t like football, I just know absolutely NOTHING about it. I went to a college where we didn’t have a football team (it got cut the year before I got there, because they were so bad) so I never really learned the ins and outs of the game. And high school football doesn’t count because while I went to every single game, I was so much more concerned with seeing my girlfriends that paying attention to whatever was happening on the field. Plus I grew up in a house with 3 girls and 1 guy, so we always over-ruled my dad when it came to watching TV! So whenever it’s on I’m 100% clueless. But, while I can’t get behind spending all day Sunday watching the games or spending hours pouring over a fantasy football team (my husband wakes up early to trade players before his friends wake up so he gets the best trades) …. I can 1000% get behind football food. Hence these Jalapeño Bacon Loaded Potatoes!

It’s everything you’d want in a loaded potato but in mini form so you can serve them as a side dish, as an appetizer or as a main as far as I’m concerned. There are no rules when it comes to game day grub! The base is my perfectly roasted potatoes (which are on repeat at my house all the time), and then they are loaded up with cheese, jalapeños, bacon and chives. It’s half nacho / half loaded potato and you cannot go wrong! 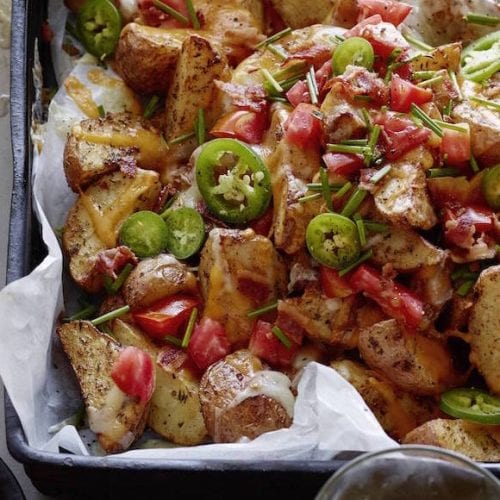