To say I’m obsessed with soup is an understatement. I could do soup on a nightly basis during these colder months and it was recently brought to my attention that I did not have a Potato Leek Soup on What’s Gaby Cooking and honestly… that’s a problem. Well not anymore… we’ve got this herby potato and leek soup that’s here to stay and I am obsessed. It’s rich and decadent but still light (I mean, really there’s very little butter). And it freezes like a champ if you want to double the recipe and store for a later date.

Serve it up with my all time favorite garlic bread and you’re in business. It’s perf for any chilly days that require a bowl of soup and some carbs for lunch or dinner!

And yes – I know I’ll get this question in the comments so to answer it up front… you can totally use Russet Potatoes if you prefer. I just happen to keep Yukon Golds on hand at all times. But Russets work just as well!

And if you need a few more wintery soups for your arsenal: 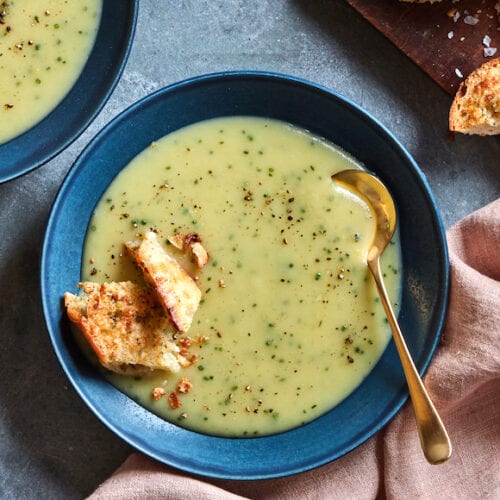